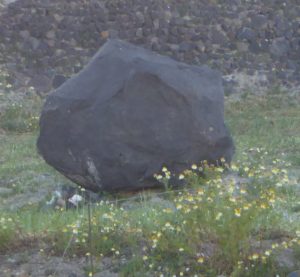 It was pointed out in the “Fake Biology” post that the world of biology defines an enzyme to be a protein catalyst, and a catalyst to be a molecule that “speeds up a chemical reaction.

This post is being written while spending time with family and friends at a celebration in Santorini, Greece.  Santorini is the remains of a volcano that exploded 3,700 years ago, destroying an advanced city thought by many to be the lost city of Atlantis.  Yesterday, we visited the archeological dig site of an ancient city on the volcano island and the tour guide pointed out what she called the rock “bombs” that flew out of the mouth of the exploding volcano and destroyed buildings.  There were a number of them on display there.

This picture, taken from the villa we are staying in, is one of these “bombs” on the hillside opposite the villa.  The  rock is precariously situated on the hillside, and will eventually roll down the hill due to erosion and/or an earthquake.

Someone in our group mentioned that a person with a shovel and a pry bar could do the same thing in 10 minutes.  Such an action by a human (intelligent machine) would speed up the natural process of erosion that reduces the activation energy required to dislodge the bomb. This is analogous to the intelligent work an enzyme does to “build” a molecule compared to the molecule being formed by a natural chemical reaction. This analogy works from a specificity point of view as well as a thermodynamics point of view because the human could control the timing of the event and the direction that the “bomb” would roll down the hill.

A close-up view shows that someone has stuffed stones to, in effect, increase the activation energy.  This is an example of intelligent work expended to offset the effects of natural causes.