Machine Design: Top Down – Bottom Up 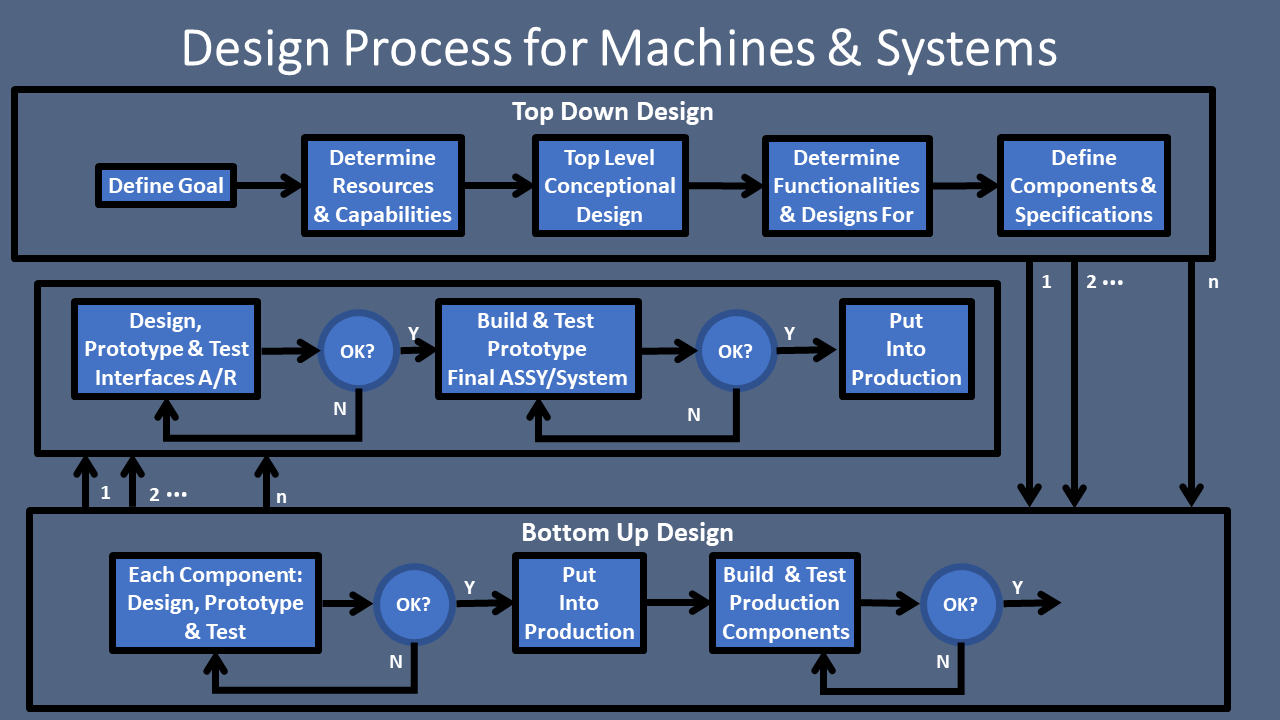 Machines are much harder to design and implement than static entities.  This post will explain the creation process and hopefully provide a sense of the level of complexity and coherence that is involved.

Machines and the 2nd Law

How Logical Functionality and Gain are Implemented in Machines

I’ve been designing machines my whole professional life, never thinking about the fact that we engineers are embedding intelligence in matter/energy, and, from a physics point of view, what it takes to implement this functionality.  The short answer is that it requires being able to create state changes with low activation energies.  This equates to “unstable equilibrium.”  This post is to explain why this is necessary and how we engineers  deal with the problems involved and how the techniques we use are different from what we see in life.

ID vs. Materialism Debate – An Opinion

It is Memorial Day.  The headline story in the Seattle Times paper this morning is entitled “Science curriculum debate moves to School Board vote.”  The piece uses an 8th-grade teacher explaining mutation as an example of the Amplify Science program which the vote is about.  I think we can all surmise which side of the ID debate this program is on.

“ID is not science and therefore cannot be taught in schools” is a response virtually all our friends give, including the theists,  when this subject is being discussed.

The arguments “irreducible complexity,” “where does the information come from,” coherence, causal circularity (a new argument?) do not confront the “not science” argument directly.

But the realization that machines depend upon logical functionality as a minimum, (it could be a higher level, e.g., neural network, abstract or supreme levels), that logic is a form (the lowest) of intelligence, and that life depends upon machines in each cell, we have the argument that life itself is not all science; it is science plus intelligence!

And the argument does not end there.  We can show, several ways, that natural causes cannot create machines:

I believe the machine argument is the best in the ID quiver.  It is different and more powerful.  It directly ties intelligence to life.  It provides new, better arguments about why natural causes cannot create life. It is falsifiable. This is an engineering orientated argument that is right down our alley.

I also think there is an impressive way to illustrate and teach some of the principles involved with the machine-life connection. An egg is a two-way metaphor for life; Christian/Easter, and the chicken-egg conundrum. The idea is to design a machine inside the egg that, when running keeps the egg balanced on an end (unstable equilibrium), tilts (away from equilibrium) when the egg is “sick” and falls over on its side when “dead” (equilibrium). Imagine ID talks starting with the speaker setting the “ID egg” on the podium and in classrooms when the teacher is teaching biology. I’m working on it.

Note to Self and Joe D.

This post was written as a “note-to-self” lamenting whether or not the enzyme Aconitase is a machine in the sense described in the referenced paper I recently wrote. The claim made in the paper is that some enzymes are machines and function differently than normal chemical reactions, including those involving catalysts – that enzyme action is a different paradigm. The paper discusses what machines are, from an engineering point of view, and watching the video showing the Aconitase enzyme in action shows some, but not all what I expected based on the characteristics of what I define as a “machine”.

In the paper “On the Limits of Natural Causes” the claim is made that all machines require logical functionality enabled by energy.  But is energy always lost, that is, not recovered? The reason this question arises is video 2 in the paper which is an animation of the Aconitase enzyme converting a citrate molecule to an isocitrate molecule.  These two molecules have the same atoms and types of bonds, so it would seem that the bond energy and entropy of the molecules is the same. There is no hint that any expended ATP molecules for the enzyme to facilitate the conversion which suggests that the claim is not always true in the lossless molecular world. The claim is based on the concept that machines perform specified work which requires logical functionality which requires energy expenditure. An energy analysis of this enzyme’s operation should answer this question. However, knowing that the entropy and enthalpy are the same both before and after the conversion is possibly proof that no energy was lost during the process.1

A colleague suggested that the starting and ending entropy are different that accounts for the energy lost due to logical functionality. But I am not convinced.2 The Aconitase enzyme is required to create isocitrate molecules when needed, and building the enzyme does take materials and energy. So the question (do some enzymes not consume energy to power their logical functionality?) posed here does not impact the arguments made in the paper, that is, that intelligence requires expenditure of energy that otherwise (in the natural world, no intelligence involved} would not be necessary. The paper would require some adjustment to the intelligent work definition that makes an exception for some molecular enzymes whose intelligence is embedded in the specified mechanical configuration of the enzyme. And the explanation that sometines the logical energy is recoverable without loss would need to be added. However, the fact remains that the specified configuration of the enzyme molecule is a requirement to achieve a timely conversion of the citrate molecule to an isocitrate molecule. 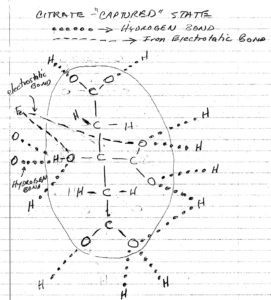 Figure 1 is the chemical equation for the citrate molecule with the electrostatic bonds shown in the video added, shown as dash and dotted lines. My original thought was that if the magnitude of these bond energies could be calculated for each state of the process,  one could determine if energy was conserved or not.  But on second thought, it would seem that one is making and breaking the same bonds, therefore the net sum would be zero.3

Assuming the transformation of the citrate to isocitrate molecule is achieved without any free energy change to the system, the next question is: what causes the each of the next process steps to take place? The logical answer (to me) is that each step establishes new initial conditions that provide a singular, specified state change with the available free energy. If this is true, then the enzyme design is very, very sophisticated!  The last state change would have to “eject” the newly formed isocitrate molecule.

The figures below are my interpretation of the covalent bonds made and broken at each step of the conversion process as shown in the video.  The emzine amino acid involved in these interactions is identified, and the water molecule that is formed in the process is also shown.  The electrostatic forces involved in each of these stages is not shown in the video nor shown in these figures. 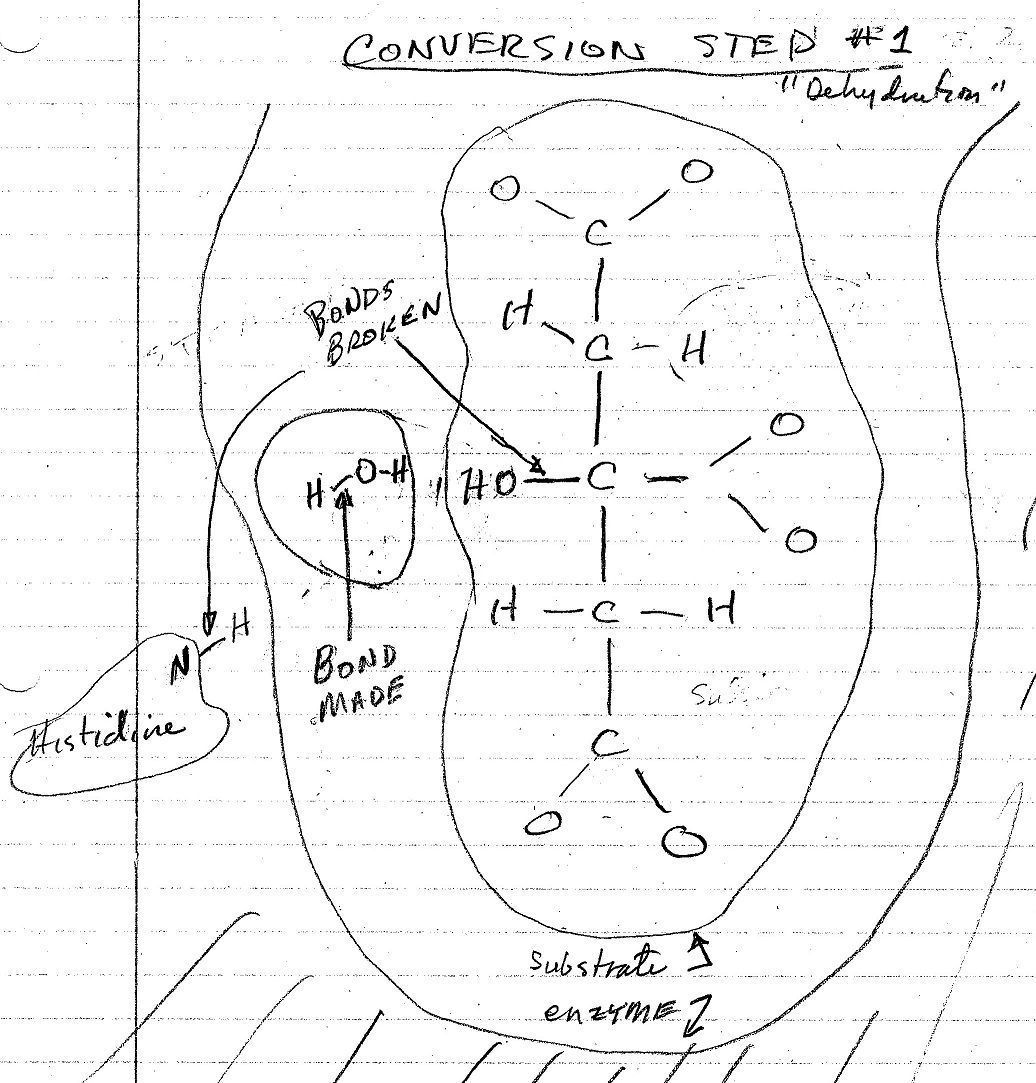 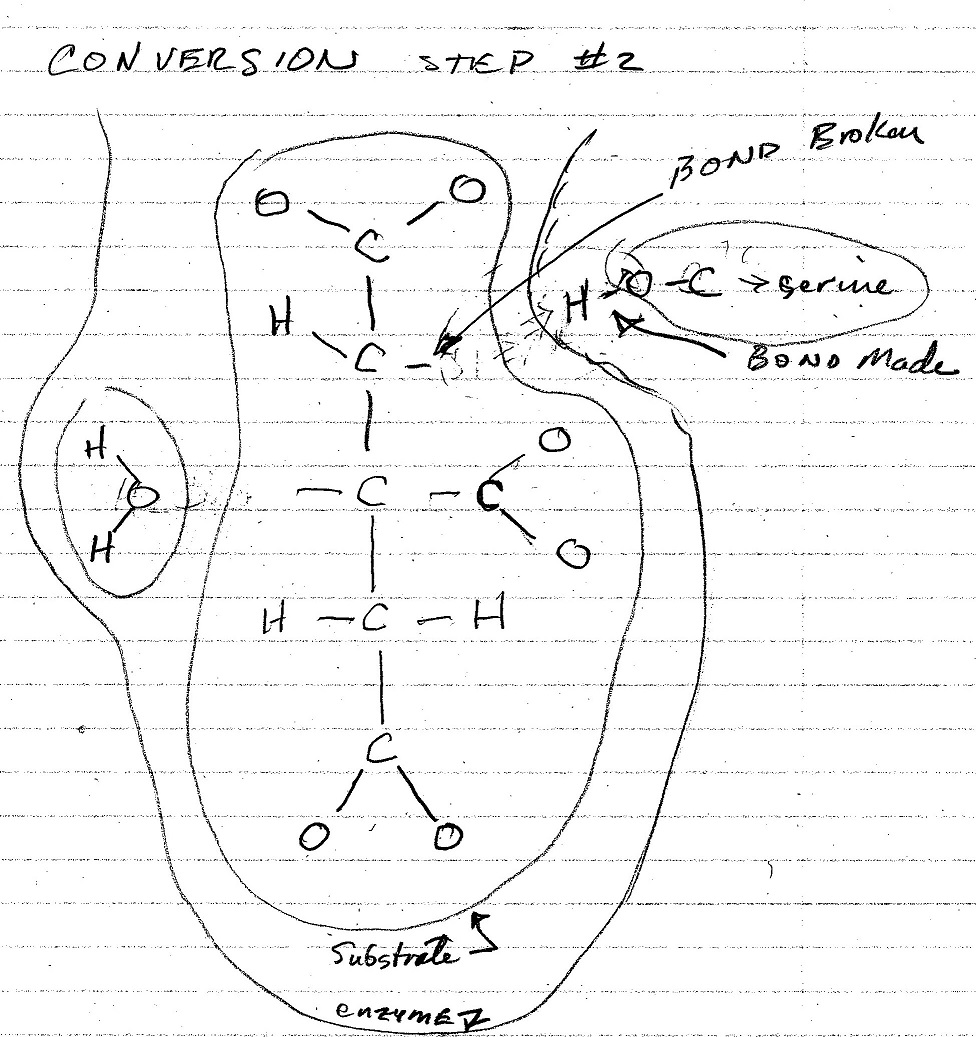 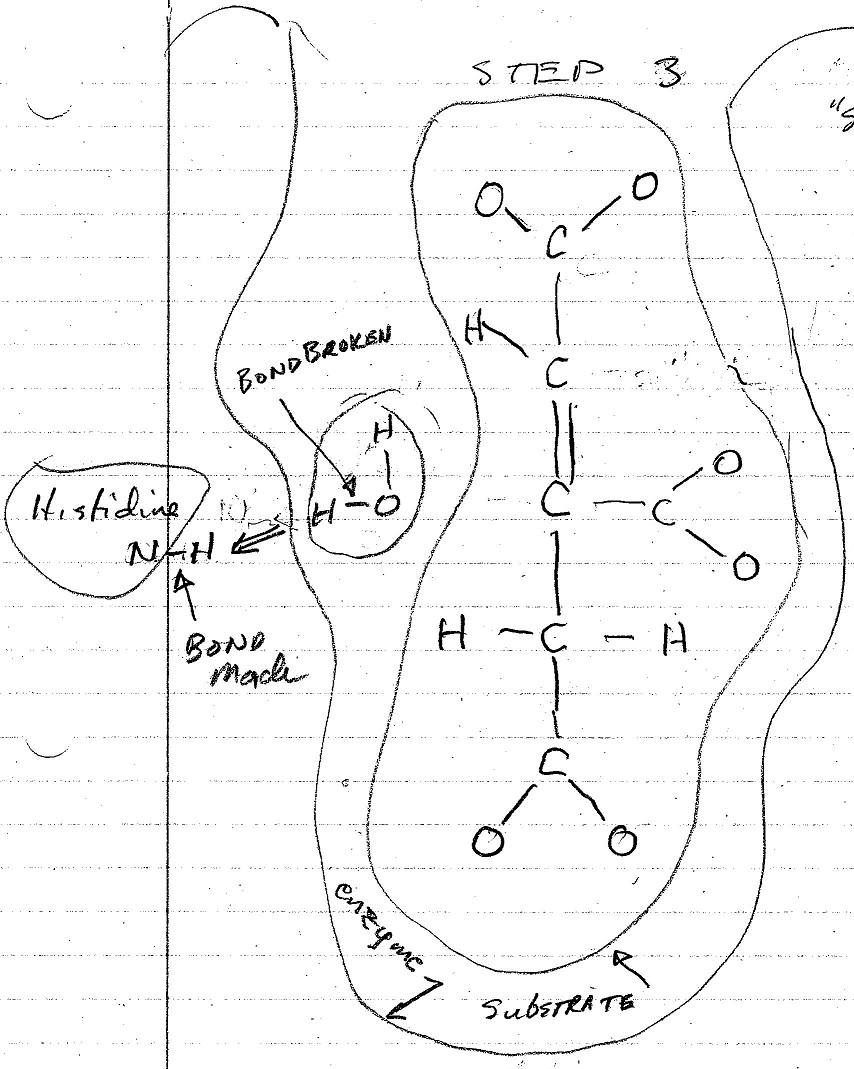 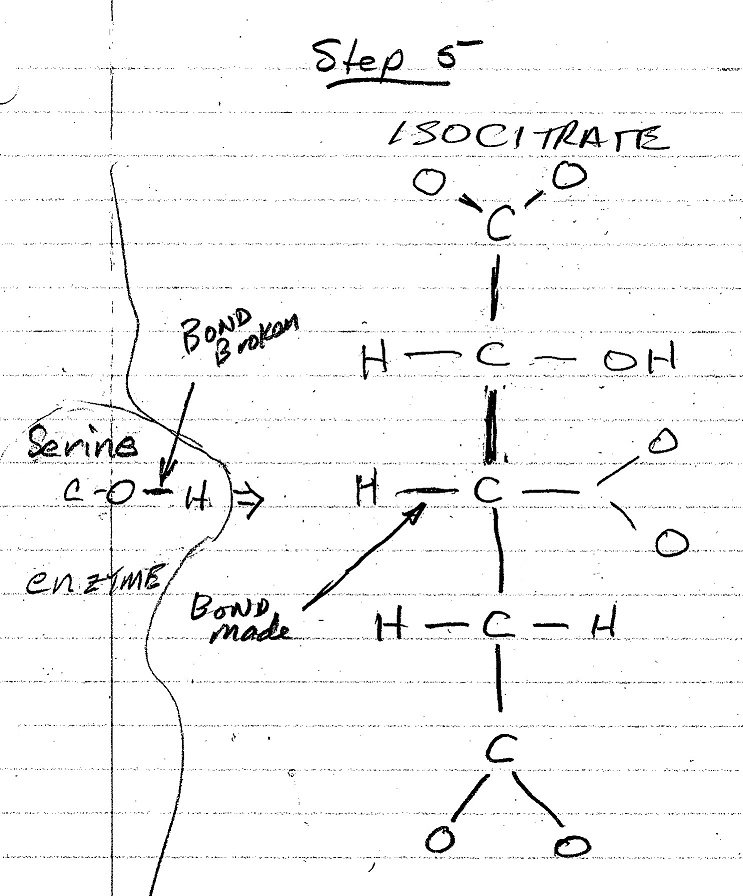