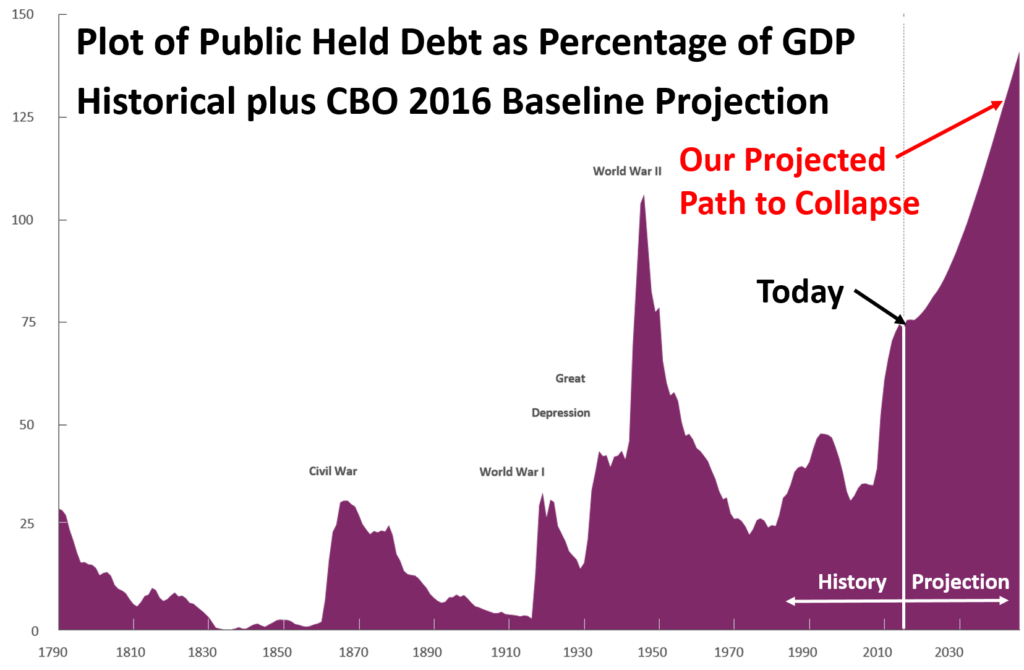 The Only Way We Can Avoid a Fiscal Collapse

This Election Determines Survival of Our Country

This provocative title is correct.  Common sense and our federal forecasters tell us that we are rapidly headed toward a financial melt-down.  Should we be worried?  Can we stop it?  Collecting information, some analysis and connecting a few dots provides the answers and the solution.

Dot 1:  Our government has been forecasting fiscal collapse for over a decade.

Each year the GAO (General Accounting Office, our governmental spending watchdog) and the CBO (Congressional Budget Office, our government’s official forecasting agency) publish long range forecasts that predict fiscal collapse.  The latest reports predict that within the next 20 to 40 years the debt to Gross Domestic Product (GDP) ratio will reach levels that have always resulted in collapse and human suffering.  They explain that the problem stems from current law that mandates perpetual deficit spending driven by the entitlements.  Every report for over a decade conclude by saying that our course is “unsustainable.”

The plot below is two scenarios of projected debt to GDP ratio provided by the 2016 GAO long term forecast.  The Baseline scenario represents current law and the Alternative scenario represents current law adjusted for “historical trends.”  The Alternative scenario is more realistic because it typically involves continuation of benefits that current law has scheduled for termination unbeknownst to the public.  The Alternative scenario reaches 150% Debt to GDP ratio (Gross Domestic Product) by 2039, and the Baseline projection reaches this level by 2052.  The 150% GDB/Debt ratio is not an automatic tipping point for financial collapse, it just represents a situation that is virtually impossible to recover from without writing off commitments to citizens and destroying lives.  We are already at a point where getting back to sane levels of debt will be extremely difficult and will require significant sacrifices.  And if we don’t make meaningful structural changes soon, we will march ourselves over the metaphorical fiscal cliff while 70% of us here today are still alive.  The projections show that “tightening our belt” by reducing existing benefits (Baseline scenario) does not prevent collapse, it just delays it.  The CBO 2016 projections are virtually the same.

Figure 1.  GAO 2016 forecast of debt to GDP ratio, showing 150% is reached by 2039 by Alternative assumptions (most probable), and by 2052 if current law is adhered to without likely adjustments.

Dot 2:  The cause of this unsustainable situation

We no longer follow the Constitution as the Founders designed it.  They defined the role of the federal government to do things that apply to the country as a whole, such as national defense, treaties with other countries, printing money, establishing a system of justice, and systems for patents and copyrights as explicitly stated in Article 1, Section 8 of the Constitution.  All other items, such as things that applied to citizens directly such as entitlements, were left to the States and to the citizens as emphasized by the 10th Amendment.  Nothing worried our founders more than future generations abandoning the limits placed on the federal government.  This is the reason they called our country a Republic instead of a Democracy, to make this distinction clear.  They knew by their study of history that Democracies never lasted long because eventually the majority discovered they could use the government to redistribute wealth from the richer minority.  As John Adams said: “Remember, democracy never lasts long. It soon wastes, exhausts, and murders itself. There never was a democracy yet that did not commit suicide.”  Being unaware of the limited role of the federal government, we cannot appreciate how it makes our country different and better.

Today, portions of Article 1, Section 8 of the Constitution have been reinterpreted to allow entitlements.  This has happened because the idea that the Constitution was outdated and did not deal with the current problems became fashionable.  The leaders promoting the need for a more responsive and powerful federal government were able to implement their agenda by pressuring the Supreme Court and by selecting Justices who agreed with this sentiment.  This has changed our country from being what our Founders called a Republic to being a Representative Democracy where the federal government can perform functions reserved to the States and citizens at the behest of the majority and at the expense of the minority and future generations.

Dot 3:  Magnitude of our National Debt.

Imagine a family with an income of $100,000 per year.  If this family was the Federal government, it would have a credit card debt (unsecured loan) of $655,000, based on fiscal year 2016 results.  And it would be spending $118,000.  Imagine this was your family.  Would you be sleeping?  What would be your level of panic?  Shouldn’t we as a country be concerned?

It is impossible for a family to get to this position – the bank would have shut down their credit card long, long before this condition was reached.  So why can the federal government do it?  There are four reasons:

Dot 4:  The Theoretical Basis for Federal Restrictions on Entitlements.

A democracy is an example of a positive feedback loop to a control engineer.  Think of a driver steering a vehicle.  If the vehicle is drifting to the left, the driver’s natural tendency is to turn the top of the steering wheel to the right to offset the pointing error.  This is negative feedback whereby the natural human reaction creates a correcting result.  But say the car was changed such that when the driver turned the wheel to the right when drifting left, it would do the opposite – it would turn the vehicle more to the left.  This is called positive feedback, and, in the case of the vehicle, likely would result in an accident.

Majority rule is an example of positive feedback.  Majority rule, when implemented by the whole population of a country, and applies to all possible things government can be involved in, creates bad results because of human nature: the natural tendency of humans to act in their own self-interest.  It is in the interest of the majority of citizens to vote for politicians that will redistribute income from the wealthier minority and/or from future generations, and it is in the best interest of the politicians to do so.  Thus one must conclude that the entitlements can never be expected to be made fiscally responsible at the federal level as it is not in the best interest of the majority of the citizens or of the federal politicians.  Our founders were extremely smart and thoughtful to make this observation and to devise a “cure”: the vertical separation of powers imposed by Article 1, Section 8 of the Constitution.  This feature has never been implemented by any other country, and it is what makes our country different and special, as long as we keep it.

Dot 5:  Why the Dynamic is Different in the States.

States cannot print money, so they have to borrow every dime they overspend on the open market.  This provides pressure (negative feedback in engineering terms) in a corrective direction, as the politicians are forced to balance the wishes of the majority with the monies available.  The minority can move to a different state if mistreated by the majority adding negative feedback.

Is this federal-state difference in fiscal responsibility real?  If the family making $100,000 per year was all of the states’ finances combined, the credit card debt would be $62K and they would have spent $82K in 2015.  So in practice, the states have proven to be much more fiscally responsible – by a factor of over 10, an order of magnitude (X10)!  And last year their collective revenues exceeded collective expenditures, which means that they can and do work within their budgets.

The US is the richest and most powerful and influential country in the world today.  Our bankruptcy would probably drag the whole world into the worst depression the world has seen in modern times.  A perpetual reduced standard of living will exist because of our huge debt with diminished means of paying it off.  Our fate will likely be like that of the ancient Greeks and Romans.

As bad as this outlook is, the worst loss will be the failure of the American experiment which gave the world the best form of government ever invented and whose example has improved the lives of billions of people.  If we re-boot, we will unlikely go back to the founding principles because we do not understand or appreciate them.  If we allow this to happen, it could be the start of a new “Dark Age”.  It is ironic because we are lead to believe that we are “progressing”, when in fact, we are regressing to what our founders were trying to avoid.

The Obvious Solution is to Move the Entitlements to the States!

Making entitlements sustainable at the federal level will not work over the long term because of human nature acting in a democratic federal government.  That leaves eliminating the entitlements or moving them to the states as the only viable solutions.  Stopping Social Security cold would suddenly leave millions of elderly citizens destitute. It would be immoral to deny this earned benefit to those that really need it.

Therefore, the only moral alternative is to move the entitlements to the states.  Doing so has other advantages other than fiscal responsibility.  It does not mean that entitlements have to be eliminated.  Moving them to the states is a method of forcing them to become financially sustainable.  It provides the opportunity to improve the entitlements, as many ideas will be tried and successful approaches will be found and adapted by other states.  In other words, there will be competition and continual improvement.  Another benefit is that the purpose of entitlements should be to help people.  All the Federal Government can do is move money around which gets people from one day to the next, but does not provide the personal help to become self-sufficient and to gain self-esteem.  The Federal government is the worst level of government to supply such needs.

So we have a choice:  fiscal failure or move entitlements to the states.  But this choice depends upon the next election which is only a month away.  Here is the reason:

Moving the entitlements to the states is not on the radar screen of anyone right now, and it is not in the interest of federal politicians to do so.  The only branch of government that can make this happen is the Supreme Court. It can render decisions declaring federally run entitlements to be unconstitutional.

The new president and Senate will determine who will fill the existing vacancy and very likely more.  There is hope that .

This stark reality is that both political parties support Federal Entitlements.  Unless we can educate our public and our politicians about the necessity of moving the entitlements, fiscal collapse is our destiny.