This is a book recommended by my PhD. biologist friend to learn about the cell’s mechanisms. I’ve learned a lot. One overall impression is the sheer volume of things going on. But I could not believe my eyes when I read the following which is part of the introduction to Chapter 2: 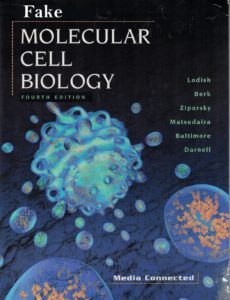 “About 7 percent of the weight of living matter is composed of inorganic ions and small molecules such as nucleotides (the building blocks of DNA and RNA), amino acids (the building blocks of proteins), and sugars.  All these small molecules can be chemically synthesized in the laboratory.  The principal cellular macro-molecules – DNA, RNA and protein – comprise the remainder of living matter.  Like the small molecules found in cells, these very large molecules follow the general rules of chemistry and can be chemically synthesized.”  Then further down the paragraph, it says this:

“The realization that complex processes such as evolution, development of an organism from a fertilized egg, motion, perception, and thought follow the rules of chemistry and physics – and that no vital or supernatural force is involved – has profound philosophical and even political implications.”

The book defines an enzyme as: “a biological macro-molecule that acts as a catalyst” and a catalyst as: “A substance that increases the rate of a chemical reaction without undergoing a permanent change in its structure.  Enzymes are protein catalysts.”

These definitions assume that the work of  the molecular machinery is chemistry, the result of natural causes. There is no recognition of the fact that machine work is fundamentally different from natural work. The chemical synthesized molecules are the result of careful process control, not the result of unguided natural causes.  In addition, the specificity required for at least some the functional proteins is beyond the reach of lab synthesis as far as I can tell from the literature.

In addition, it seems that some variation of the word evolution, or some reference to evolution is on every page. There is no doubt in my mind that part of the “knowledge” this book is conveying is materialist doctrine without supporting evidence.

For these reasons, I feel this book deserves the “Fake” label in the title.